After VMware invited me to speak on the Customer Panel at last year’s VMworld 2017 in Barcelona, VMware came back to me again and asked if they could write a case study about the VMware NSX deployment I have done at my company.

This is my first case study and it’s nice that VMware thought the story was worth sharing. Have a look and read the case study here: 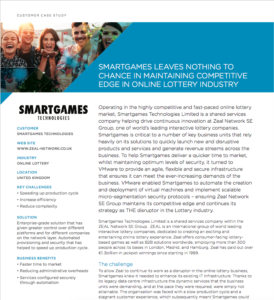 Over the past two days I spend some time with VMware NSX-T 2.0 which has multi-hypervisor (KVM and ESXi) support, and is for containerised platform environments like Kubernetes and RedHat OpenShift. VMware has as well an NSX-T cloud version which can run in Amazon AWS and Google cloud services. 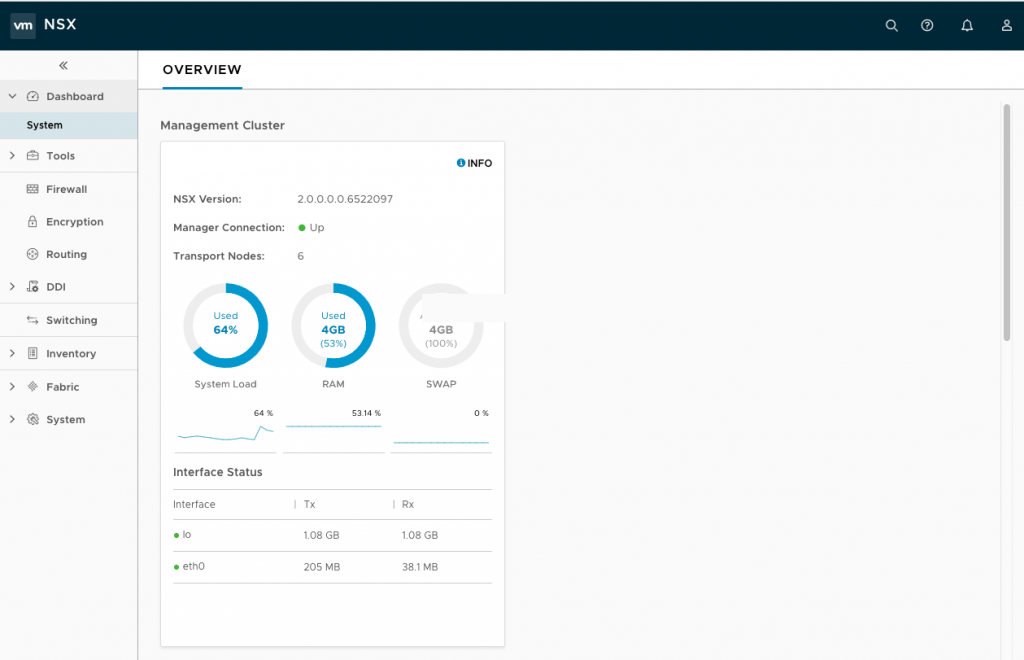 VMware did quite a few changes in NSX-T, they moved over to Geneve and replaced the VXLAN encapsulation which is currently used in NSX-V. That makes it impossible at the moment to connect NSX-V and NSX-T because of the different overlay technologies.

Routing works different to the previous NSX for vSphere version having Tier 0 (edge/aggregation) and Tier 1 (tenant) routers. Previously in NSX-V you used Edge appliances as tenant router which is now replace with Tier 1 distributed routing. On the Tier 1 tenant router you don’t need to configure BGP anymore, you just specify to advertise connected routes, the connection between Tier 1 and Tier 0 also pushed down the default gateway.

On the Edge itself you have two functions, Distributed Routing (DR) for stateless forwarding and Service Routing (SR) for stateful forwarding like NAT: 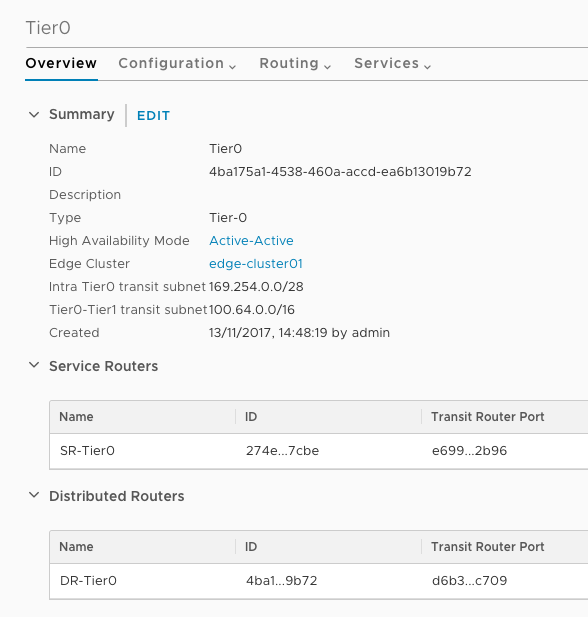 Load balancing is currently missing  in the Edge appliance but this is coming in one of the next releases for NSX-T.

Here a network design with Tier 0 and Tier 1 routing in NSX-T: 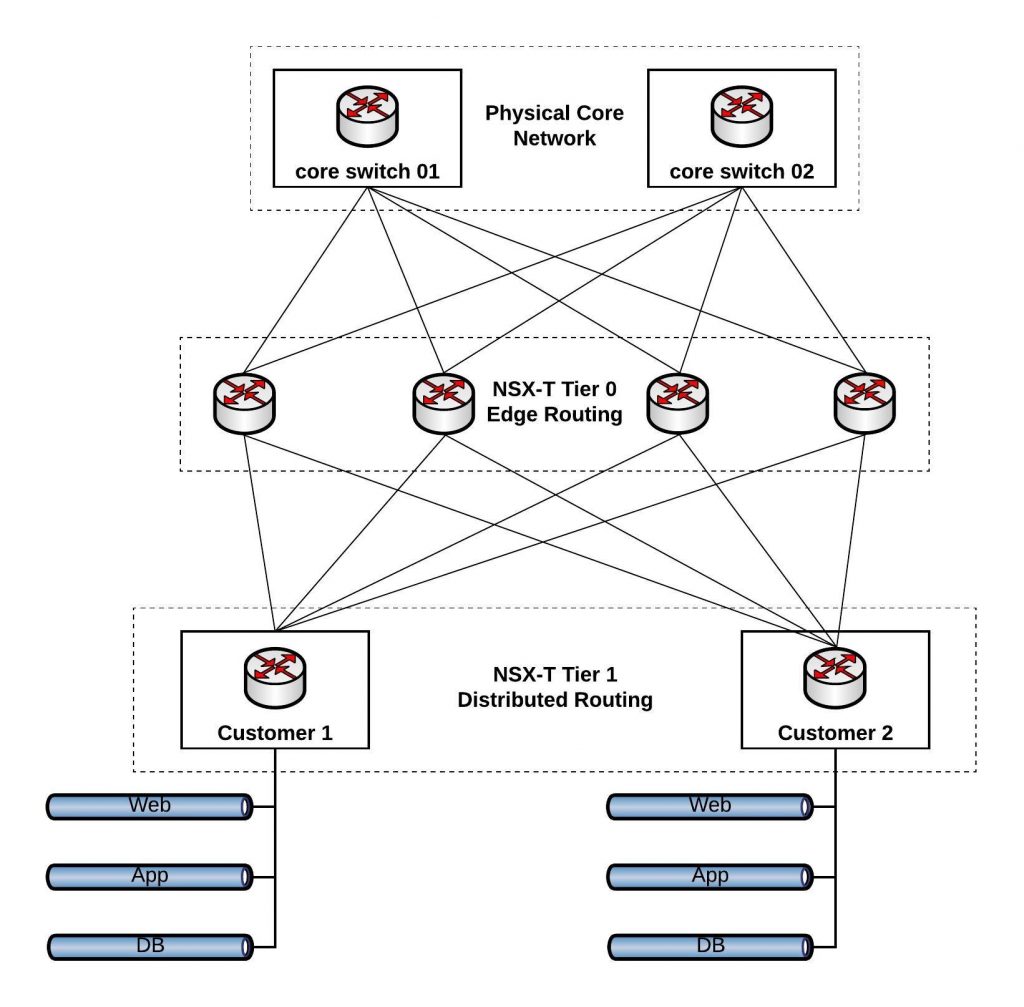 I will write another post in the coming weeks about the detailed routing configuration in NSX-T. I am also curious to integrate Kubernetes in NSX-T to try out the integration for containerise platform environments.

VMware invited me to be a speaker at a customer panel about VMware NSX at VMworld Europe 2017. I am exited to get the opportunity and share my experience together with other customers in deploying and running VMware NSX in modern datacenter environments.

Here the session information and schedule:

“In this session, a number of VMware NSX customers will discuss how NSX has been used in their environments, specifically focusing on how their organisation has benefited from security, automation, and application continuity-related projects.”

Very interesting and successful panel discussion with other customers and VMworld attendees. 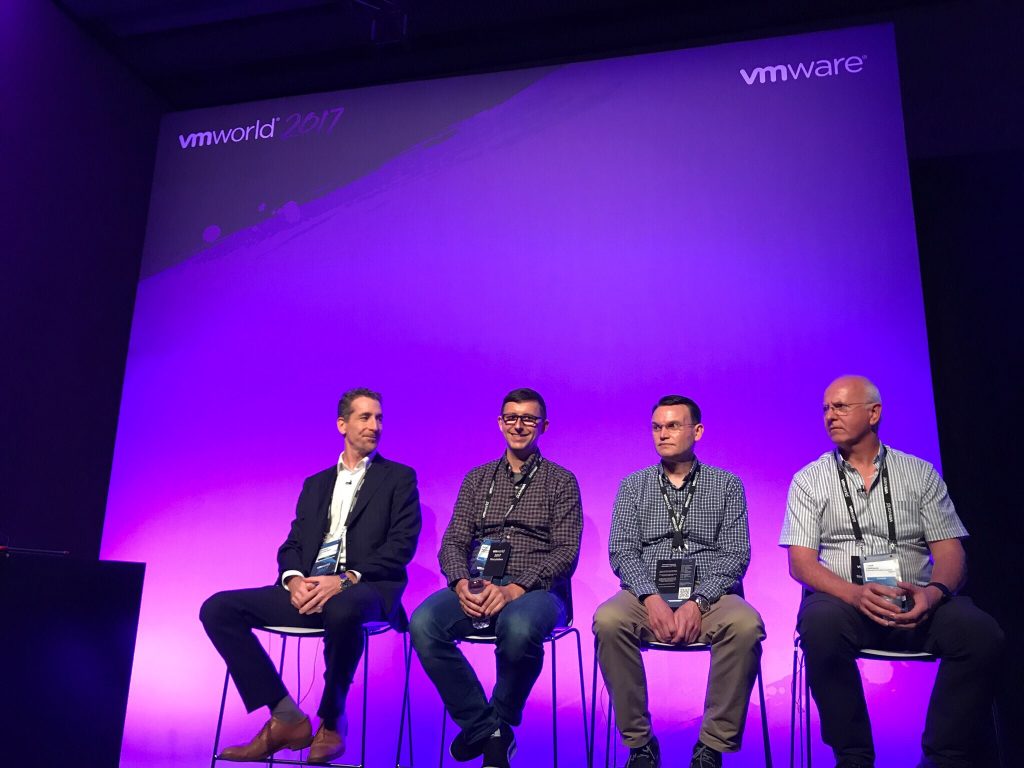 Here the recorded audio of the customer panel:

We use a Layer 2 network fabric, see my recent post about an example: Ansible Playbook for Cumulus Linux (Layer 2 Fabric) 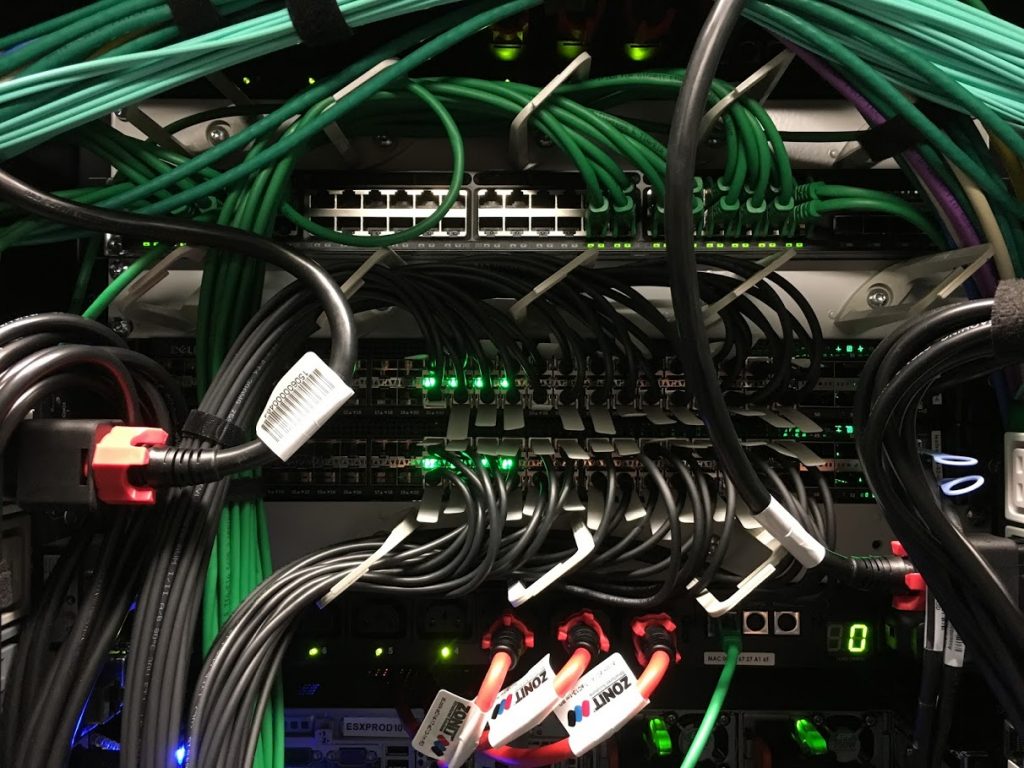 Got a bit tight in the rack for the DA cables, basically each server has 2x 10Gbit/s data- and 2x 10Gbit/s storage-network connections. 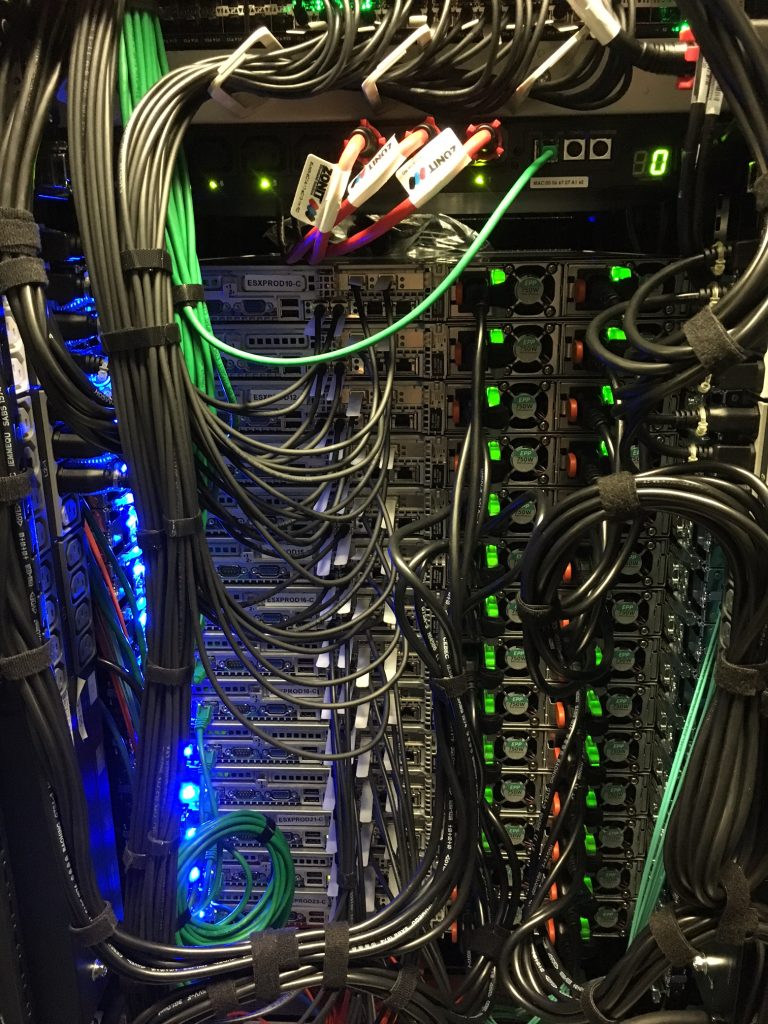 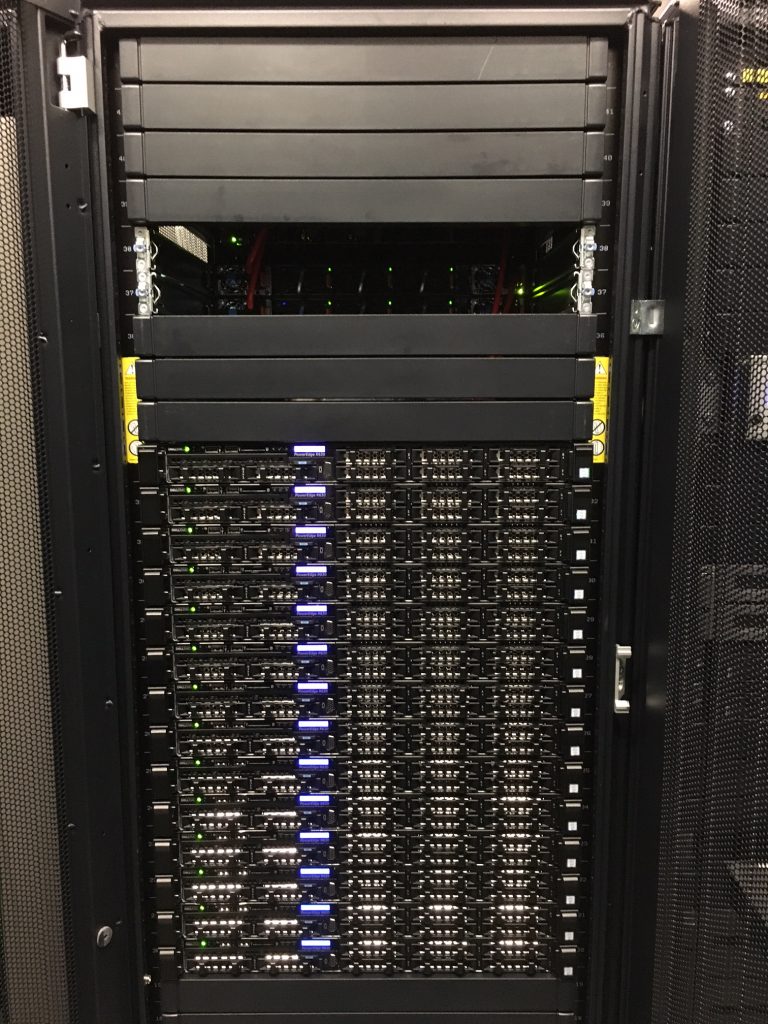 Another two racks will follow soon in the same configuration.

In my previous post about the VMware NSX Edge Routing, I explained how the Edge Service Gateways are connected to the physical network.

Now I want to show an example how the network design could look like if you want to use NSX: 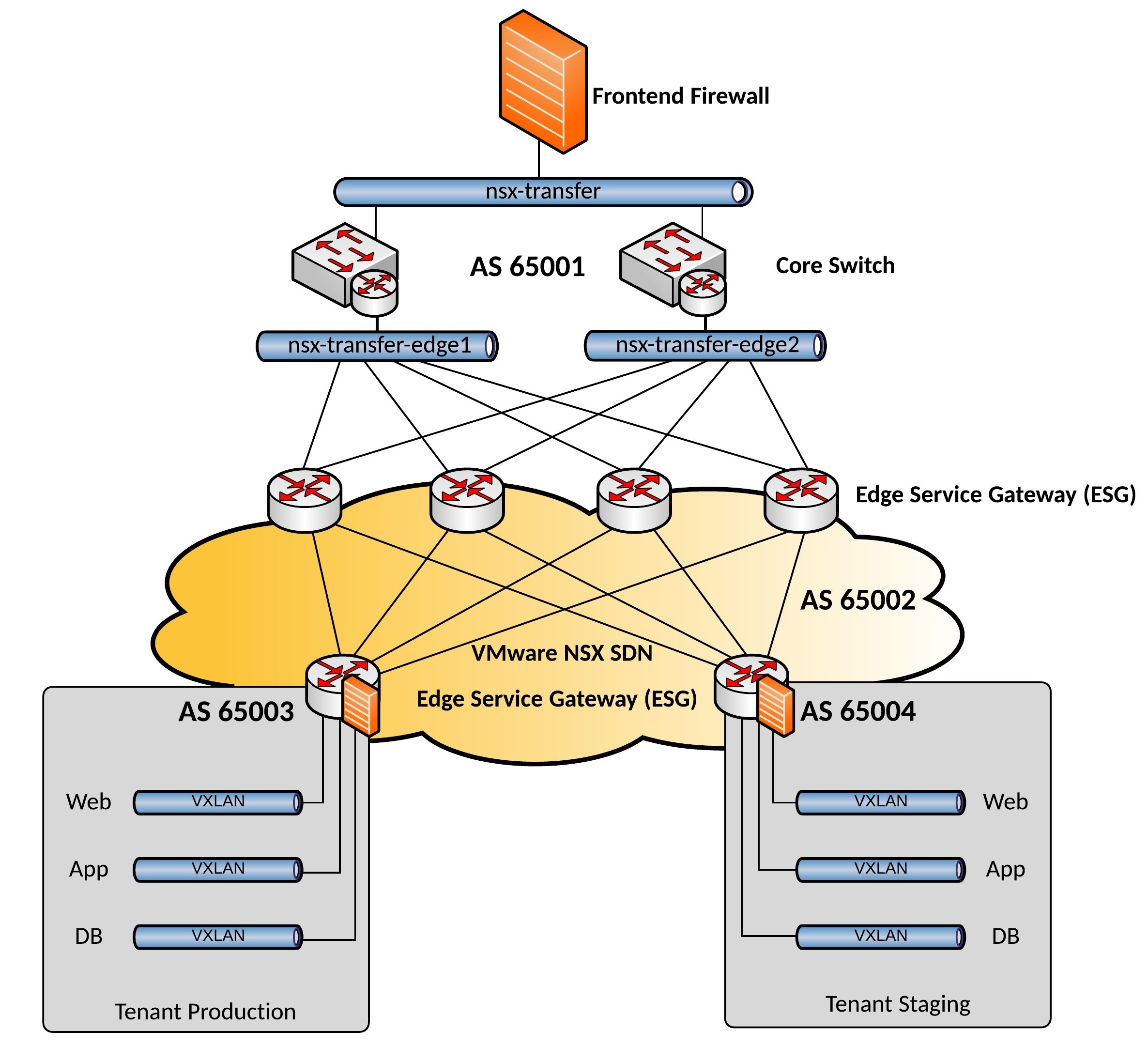 Of course this really depends on your requirements and how complex your network is, I could easily replace the Tenant Edge Service Gateways (ESG) with Distributed Logical Router (DLR) if your tenant network is more complex. The advantage with the ESGs is that I could easily enable Load Balancing as a Service to balance traffic between servers in my tier-3 networks.

The ESGs using Load Balancing as a Services can we as well deploy on-a-stick but for this you need to use SNAT and X-Forwarded-For: 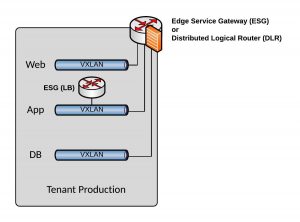 Very interesting it gets when you start using the Distributed Firewall and filter traffic between servers in the same network, micro-segmentation of your virtual machines within the same subnet. In combination with Security Tags this can be a very powerful way of securing your networks.

About what VMware NSX can do, I can only recommend reading the VMware NSX reference design guide, you find lot of useful information how to configure NSX.